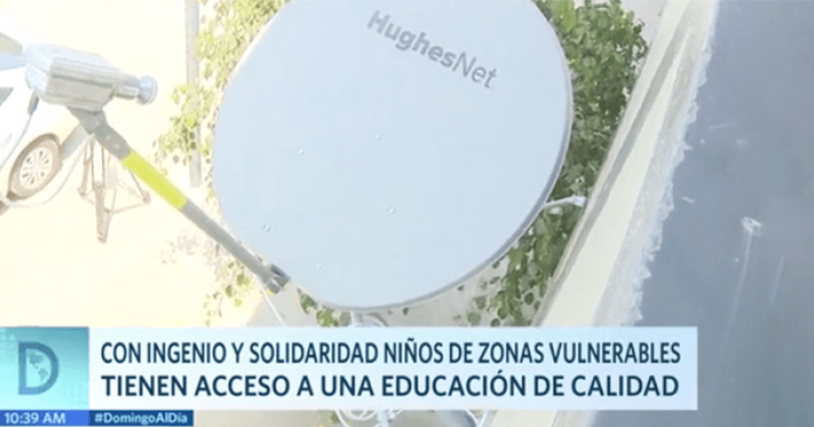 “Of the 11 high schools in Callao [Peru], 10 don’t have Internet access. It’s because they’re in difficult areas like this one,” explained Father Miquel Ranera, president of the local school system, noting the region’s safety issues and lack of infrastructure.

“Even if companies install cable, they get stolen so they stop providing service.” Additionally, he said, Internet providers in the area typically install service that can only support a maximum of 10 computers or so.

“But what if we have 200 children in a school. Who gets to use their tablets? Do they take turns? If we put 100 children online at the same time, the service will collapse,” he said. Installing a HughesNet® satellite service dish (a very small aperture terminal, or VSAT) at each school to establish high speed Internet connectivity solved these challenges and many others, Father Ranera explained.

With more than 1.5 million subscribers, HughesNet is the flagship satellite Internet service from Hughes with coverage across the U.S. and six Latin American countries. HughesNet also offers a service tailored for small businesses, civil service and government agencies, like the Callao school system.

Prior to having HughesNet satellite Internet in the schools, Callao parents purchased cell phones with pre-paid mobile data plans for their kids to use; most do not have Internet service at home. Yet this approach was costly for families, and cell service was often slow, especially with multiple students in a classroom using their phones at the same time. Some Callao schools tried another strategy by uploading educational resources from USB sticks onto individual classroom tablets and laptops. That process proved cumbersome to update and manage.

Once the HughesNet service was installed however, each school was able to download educational content to an on-site computer acting as a local server. Then, using multiple Wi-Fi hotspots throughout a building, students and staff could connect devices to that local server and access a wealth of educational materials, minimizing multiple and frequent data downloads, and reducing associated costs.

“We’ve created a database with 60,000 books and over 25 million topics on the local server,” Father Ranera said. Students use tablets, laptops, and computers to access the local server’s landing page, which is designed to look like an online search engine. Thirty different bookmarks organize educational topics like history, biology, and math, with content that typically doesn’t change. At the same time, through the HughesNet service, the local servers can be updated regularly – even on a daily basis if necessary – to keep content fresh and incorporate new topics.

Father Ranera and the team who put this initiative together received a community award from the municipality of Pueblo Libre and are hopeful that the Peruvian government will consider rolling out the solution to other communities so that more children will gain access to robust education materials.

A Lesson for Others

According to Vinay Patel, senior marketing director at Hughes, there are a variety of similar HughesNet initiatives deployed across Latin America in places where terrestrial Internet is not available. Yet educational systems aren’t the only organizations that can benefit from an approach using HughesNet satellite Internet, a local server, and Wi-Fi hotspots. He noted that it’s an ideal solution for any situation involving multiple sites and users requiring access to relatively static content intended to be viewed frequently.

“For all users to download the same content repeatedly and do it live from the Web would be too expensive and unnecessary,” he explained.

As an example, Mr. Patel cited government sponsored health clinics, which are often the first and only source of healthcare delivery in rural communities. In such cases, proper hygiene and health care practices, vaccine information, or general guidelines for achieving good health can be stored locally at the clinic and made accessible to community members. Another example includes e-governance facilities where people come to learn about social support programs and governmental projects, or to review and update personal information associated with property taxes or land records.

In all these scenarios, content can be broadcast with one push to many servers in a system. Being able to send content to 100 locations simultaneously (rather than 100 separate times) minimizes satellite data usage and costs.

“Satellite is an inexpensive way to reach hundreds of sites. Even if you have fiber or DSL, you have to sign up for 100 individual circuits and manage those service contracts. That might involve dealing with 20 to 30 companies in the U.S. alone. With satellite, you only deal with one service provider like Hughes for your hundreds or even thousands of sites,” he said. And with satellite Internet, organizations aren’t limited to the local server approach either; they can choose to allow users to access the Web in real-time; filter or block sites for safer browsing; or make free Internet available to entice more customers.

With the right lesson plan, HughesNet can be the A+ service for government and commercial organizations with a range of needs.

5 for 50: Milestones in Mobility