Hughes Community Wi-Fi Hotspots offer a shared cost solution for making satellite broadband affordable to people in areas around the world where terrestrial broadband is unavailable or too expensive. Leveraging the Hughes JUPITER™ System, the world’s most widely deployed platform for broadband satellite services, these hotspots can be readily configured in public places such as schools, stores and community centers, or to serve neighborhoods and small businesses, where any user with a Wi-Fi capable handheld or laptop can access the Internet. By virtue of the shared solution serving tens or even hundreds of users, capital expense per user is far less than a dedicated broadband deployment and can be government-subsidized to meet Universal Service Obligations (USO) or prepaid on a per-use or subscription basis. Today, Hughes service provider partners have deployed over 32,000 satellite-enabled Community Wi-Fi Hotspots in Russia, Mexico, Brazil, and Indonesia, bringing the benefits of Internet access to more than 25 million people.

According to Vinay Patel, senior director, International Division at Hughes, “The Wi-Fi Hotspot solution and subscriber business model solve the very real problem of bringing affordable Internet access to communities everywhere, especially in areas outside the reach of terrestrial broadband.” Hughes also deployed short-term Community Wi-Fi Hotspots following the devastation of Hurricane Maria in Puerto Rico to help municipalities that had been cut-off from their communications infrastructure. This proved critical not just for storm victims to contact loved ones, but also to support the Federal Emergency Management Agency (FEMA) relief efforts.

As examples of the Home/SME solution model in Russia, long-time Hughes service provider partners AltegroSky Group of Companies and КВ Iskra have deployed 1,300 satellite-enabled Community Wi-Fi Hotspots. With an average of 250 people having access to each hotspot, the solution now reaches over 300,000 people in the Far East, Siberia, Central, Ural, and Caspian/Volga regions—all vast areas where Internet access was previously unavailable or unaffordable. 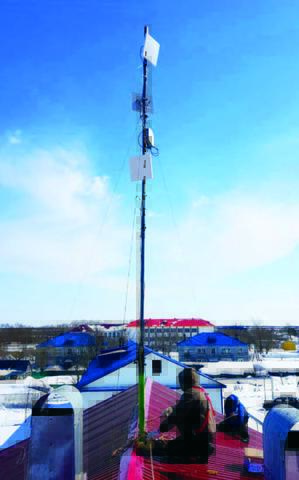 “Before we began providing Community Wi-Fi service with Hughes, many villages in Russia did not have access to reliable broadband Internet service,” said Sergey Pehkterev, head of the AltegroSky Group. “Today, we have connected hundreds of villages to the Internet.”

Andrey Romulov, chairman of the Board of Directors of КВ Iskra, added, “About 90 percent of our subscribers are connected to Hughes VSATs collectively. This solution gained popularity due to its low cost of entry, and our high quality, customer-oriented local support. For villagers, broadband Internet access is sometimes the only way to use public services and receive online education. It is difficult to overemphasize the social significance of satellite solutions—we are constantly witnessing dramatic improvements in the lives of local communities, and these stories inspire us to continue the development of digital services.”