The 25th annual “State of the Satellite Industry” Report from the Satellite Industry Association (SIA) reveals that in 2021 – despite the ongoing pandemic – the global space economy continued to strengthen and grow. Once again, the commercial satellite industry dominated the sector. There were a record number of satellites deployed; the costs to build and launch satellites decreased while their utility increased — all of which is leading to more affordability, better productivity and new markets. By the end of 2021, a total of 4,852 satellites circled the earth, an increase of 179% over the past five years. 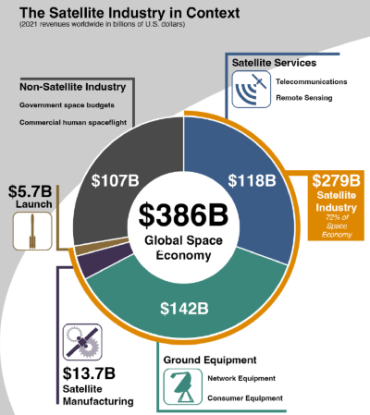 To view the executive summary of this year’s SIA State of the Satellite Industry Report, click here. SIA members receive a complimentary copy of the annual report.

Hughes ESA to Power Gogo’s Global LEO Broadband Service for Business Aviation
May 23, 2022
4 Questions Federal Government Agencies Should Consider as Employees Return to Work
May 16, 2022
Advanced Networking Made Simple: What is Network Management vs. Orchestration?
May 31, 2022
LEO Network Brings High-Speed, Low Latency Connectivity to Remote Thule Air Base
Jun 22, 2022
C-Stores and Fuel Retailers at Conexxus 2022 Consider: What Keeps You Up at Night?
May 20, 2022
Related Posts