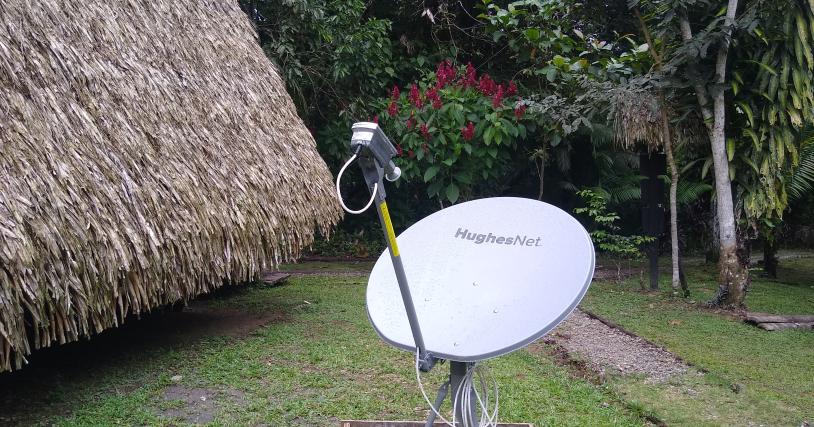 Jennifer Renton of California, along with her husband and their three children, waded through the muddy river, swollen from recent rains, and trudged from their lodge to the Interpretation Center in the Providencia community of Yasuní. Located deep in Ecuador’s Amazon rainforest and in one of the most biodiverse areas, Yasuni is largely cut off from the outside world.

Ms. Renton and her family were on vacation at the lodge associated with the Interpretation Center, an informal educational venue where visitors learn about indigenous peoples and their cultures.

“After we managed to cross the river, which had big tree logs floating down it, we dragged the boat up, walked to the huts, and saw a HughesNet satellite dish. In the Amazon!” she said. Ms. Renton later learned that the Interpretation Center had provided the village with laptops and Internet access for the very first time.

As a grant writer for National 4-H Council, Ms. Renton was well aware of HughesNet® because it is a long-time sponsor of 4-H, America’s largest youth development organization. Together, HughesNet and 4-H develop programs to inspire and educate the next generation of Science, Technology, Engineering and Math (STEM) students and leaders. The collaboration is a natural fit, given 4-H has deep roots in rural America and that’s where Hughes customers live, work, and raise their children.

What she didn’t realize is that building on its success in the U.S., HughesNet service has expanded across the Americas, bringing access to affordable, high-speed satellite Internet service to Brazil, Colombia, Peru, Chile, Mexico and Ecuador.

Prior to having HughesNet at the Interpretation Center, “the tribe was completely off-the-grid. They go into the neighboring village once every few months to buy what they can’t make or source for themselves,” Ms. Renton explained.

“The lodge has been helping the local women build the Interpretation Center themselves. They learn to braid leaves to make a roof. One woman we visited spoke Quechuan only, the other also spoke Spanish. They showed us the head strap bands they use to hold and carry heavy baskets. They took us into the jungle to show us which trees are really strong, which are good for building, and which vines can be used for lashing things together. They taught my 11-year-old twins how to carry a heavy load while using a machete to clear the path of any snakes, particularly important since the ladies weren’t wearing shoes.”

In addition to teaching visitors about their culture and practices, the women now have their own opportunities to learn.

“We saw a little girl wearing a Minnie Mouse shirt and realized she has no idea who Mickey and Minnie are. They had never seen elephants or lions until my son pulled up pictures on his phone to show them. They didn’t know where they lived or even which continent they were on,” she said. “But with HughesNet, they can learn about the world outside the Amazon. This little girl and her life will be very different than her mother’s and her grandmother’s.”

Seven Hughes Execs to Speak at Much Anticipated SATELLITE 2021 Event