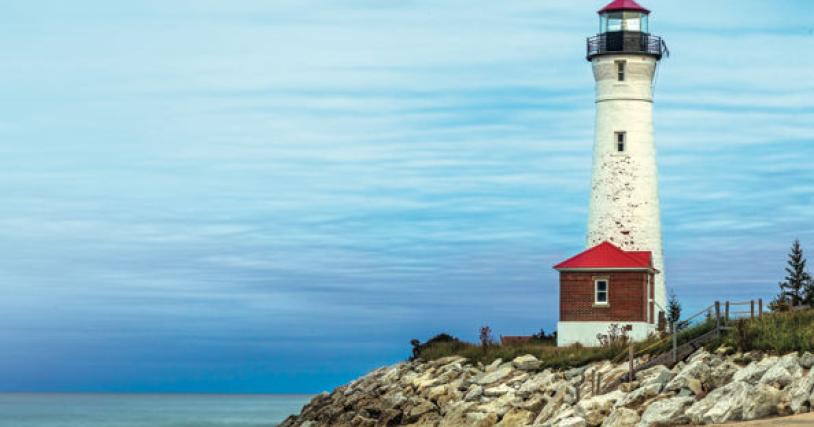 Built in 1875, Crisp Point was one of five original Lake Superior Life-Saving Stations along the coast between Munising and Whitefish Point in Michigan. Plans to build the lighthouse were proposed originally in 1896 and approved in 1902, and a 15-acre plot of waterfront land was purchased for $30 dollars in 1903.

Once completed, the site featured a life-saving station and living quarters, a brick lighthouse keeper’s dwelling, a brick fog signal building, an oil house, two frame barns, a boathouse and landing, a tramway, and the 58-foot lighthouse tower. To this day, it operates as a navigational lighthouse, as well as a popular tourist spot, museum, and gift shop.

For more than a century, the Crisp Point Lighthouse has stood on a wind-swept shore of Lake Superior guiding mariners to safety. Ensuring the historic landmark continues to operate both as a safe haven and historic tourist attraction requires a modern approach to connectivity.

When Rick Brockway stumbled upon the remote Crisp Point Lighthouse in 1993, he knew he had found something special. Located near Whitefish Point in upper Michigan, 38 miles from the nearest town, the museum and its thriving gift shop were owned and operated by an elderly couple with the help of the non-profit Crisp Point Lighthouse Historical Society. Rick began volunteering for the organization in his spare time, and soon was elected treasurer; by October of 2009, he assumed the role of president.

The Crisp Point Lighthouse Historical Society self-funds operations, costly restorations and general upkeep through income from the gift shop. In fact, the very survival of the historic site depends on processing credit cards for gift shop purchases. Each transaction requires a secure and rapid connection to the bank or credit card company to verify the card and authorize payment. Surrounded by water and trees for nearly an hour of travel in any direction, the Lighthouse lies well beyond the reach of cable or fiber services, and for a time depended on its telephone provider to process credit card transactions—which proved to be slow and unreliable. This prompted Rick to switch to HughesNet® high-speed satellite Internet.

HughesNet for Business provides the connectivity Crisp Point needs to ensure credit card transactions are processed quickly and securely, protecting this vital income stream for the Lighthouse. Rick reports that his satellite Internet service exceeded expectations so much so that they terminated their phone service and now rely on HughesNet for both voice and Internet. The bottom line is that HughesNet provides Crisp Point Lighthouse the connected experience it requires to navigate business demands and illuminate new possibilities for growth.

A Half Century Connecting the World