When an Altruist Hears the Call

One man’s effort to re-connect those still in need.

In the days and weeks following Hurricane Maria’s decimation of Puerto Rico, many people in the U.S. had no way to get in touch with loved ones and family members on the island. With the electrical and telecom infrastructure in shambles, there were very few people left with the ability to communicate beyond face-to-face conversations. To those few who were able to make contact with the outside world, hearing their family’s voices was comforting yet hearing their voices describe their experiences riding out the storm were harrowing.

So moved was he that the young man chose to put his comfortable job and personal life on hold only to become an anonymous benefactor dedicated to using his unique skillset to help others back in his native Puerto Rico.

“I had seen all the photos and video of people coming from miles and miles to stand by a single cell phone tower desperate to get a signal and use their phones,” he recalled. “As I was watching, I was thinking, I know how to get a signal to them.”

As a graduate of the Polytechnic University of Puerto Rico and now a highly trained specialist in networking and satellite communications working in the states at a university affiliated research center, he envisioned using satellite services to create free Internet “hotspots” at municipalities that remain cut-off from communications infrastructure. People around the local community could then gather in these communications oases to use their phones with access to Wi-Fi. He quickly drafted a preliminary business plan and began calling all of the providers he knew, hoping they too would want to help in his mission. He reasoned, if they could deliver highly portable equipment and satellite services, he could go and set it all up himself.

One of the providers he contacted was Hughes. Already supporting several initiatives on the island, Hughes was in a position to take a chance with the bright and motivated young man and provided him with the terminals, service, training, and support and simplified logistics and shipping all of the items directly to a storage facility the island. Other collaborators, including Vieques Air Link (a local private airline company) and Humberto Vidal (a shoe retailer) also accepted the call to assist with on-the-ground logistics in the specific areas that were in the worst shape.

Meeting his goal was initially a challenge because in trying to work directly with the Federal Emergency Management Agency (FEMA) relief efforts as just one volunteer, as opposed to an organization like an NGO or contractor, involved lengthy processes with an organization that was already resource-strained from existing operations.

“If you are in an area of dire straits after a storm like Maria, it’s extremely difficult because some of the forms can require up to 60-pages of evidence and documentation. The recommended approach is to download the forms and complete them online,” he explained. “That’s impossible to do without reliable power and connectivity. And, even if you could do it by phone using the call centers in the U.S., it was still close to a two-hour process. You’d have to have enough battery for the call and hope the cell signal didn’t drop out. Imagine 45 minutes into your phone call and the signal drops with no way to directly reach the rep you had been working with.” But where there’s a will, there’s a way so he took matters into his own hands and opted not to leverage government assistance with his mission.

To determine where to set up the hotspots, he first contacted the local governments but found they were too overwhelmed by existing recovery efforts to provide much guidance. So he acquired information elsewhere, like the public FCC status reports, identifying municipalities where he believed were in the worst shape and he could make the greatest impact. But as strong as his initial plan appeared, he soon discovered it had some limitations.

“Communications technology is only valuable in areas where it can be used, where power has been restored or has access to a generator and fuel. On my way to Puerto Rico, I hadn’t expected to see towns that were hit so badly, where there were no generators or access to fuel. If you have nothing, you need to get to a certain state where power is restored before you can get communications,” he noted. “Once that happens, then we can create a hotspot and from there, and the building blocks of healthcare and human services applications can be added.” 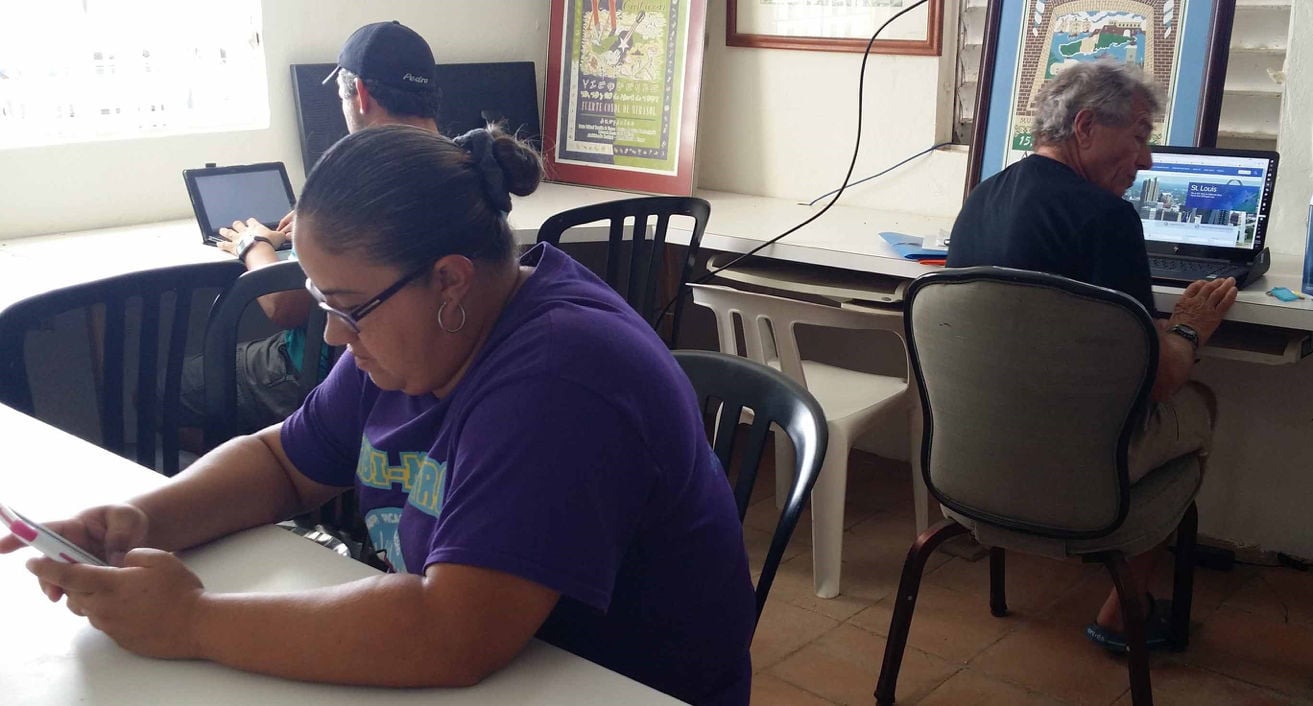 In all, eight sites were selected and four included areas that were labeled as the “most disconnected,” by a recent FCC report where more than 78% of the cell tower infrastructure was still down, weeks after the storm. The four towns included Cluebra, Vieques, Yabucoa and Comerio. On the island municipality of Vieques, residents were stuck having to drive to the side of the island facing St. Thomas where, when the weather was clear, they could occasionally connect to the distant cell signals across the water. The young man worked with the owner of Vieques Air Link to get him and the equipment to the island and even stand-by on the tarmac for several hours while he worked to establish the hotspot at the Conservation Trust office so local citizens would no longer have to hope for a crystal clear day to be able to connect to the world.

Once all eight sites were connected, the plan was to deliver service and then tapering services as municipalities regained their terrestrial-based connectivity. Today, however, it is apparent that Puerto Rico faces a much longer road to recovery than so many had first anticipated. Regardless of how long it takes, one thing is certain, the altruistic benefactor who heeded the call to action will continue to find ways to continue helping the people and the island that he loves.