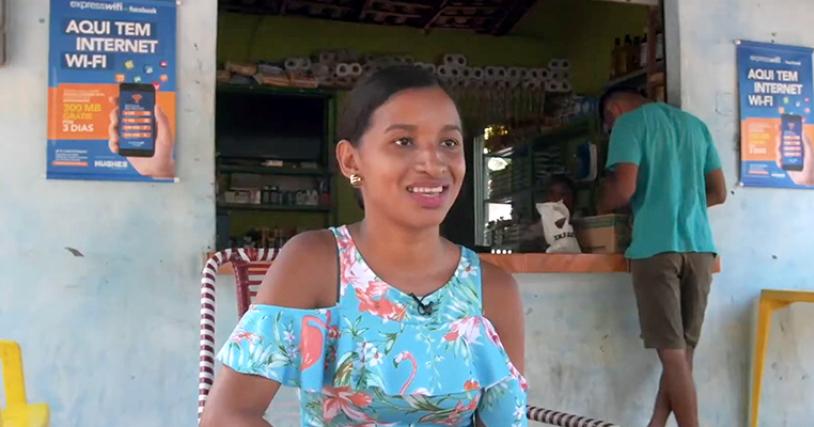 Washington, DC, March 10, 2020 – SATELLITE 2020, Booth 1201 – Hughes Network Systems, LLC (HUGHES), the global leader in broadband satellite networks and services, announced today that, in partnership with Facebook Connectivity, the company has now implemented 1,000 Express Wi-Fi hotspots in Brazil, Colombia, Mexico and Peru. Each Hughes Express Wi-Fi Hotspot is backhauled over satellite links, enabling merchants to offer affordable Internet access on a pay-per-use basis to about 500 people in their rural community where terrestrial service is too expensive or simply unavailable.

With Hughes Express Wi-Fi people can easily access the Internet where they live or work using their personal handheld devices and enjoy all its benefits, including social services, job searches, education, healthcare and commerce. Each hotspot is configured with a compact, easy to install Hughes satellite VSAT (Very Small Aperture Terminal) and Wi-Fi equipment powered by Facebook Connectivity’s Express Wi-Fi platform. Local merchants that establish these hotspots bring much-needed connectivity to citizens while also realizing a business benefit in a grass roots model.

“Before we had the Wi-Fi, we had to stand by the mango tree or go across the street to try to get a signal,” said Thais Gomes Silva, whose family owns the market in Santa Barbara village in rural Brazil that offers Hughes Express Wi-Fi. “Now, the Internet access is better, and so are sales in our grocery store.” Located in a rural part of Brazil, the town is about two hours’ drive from São Luís, the capital of Maranhão, and has limited or no terrestrial broadband infrastructure.

“Across Brazil, Colombia, Mexico and Peru – even in the most remote and rural places –  local merchants are enhancing their businesses by offering affordable, high-speed Internet access to their customers,” said Bhanu Durvasula, vice president,, International Division at

Hughes. “This solution changes lives for the better, making it possible for people to connect with family and friends, seek healthcare, reach online training and conduct business in ways they never could before.”

“The fast-paced adoption of the Hughes Express Wi-Fi Hotspots supports the mission of Facebook Connectivity to bring more people online,” said Paul Monte, technical program manager, Express Wi-Fi, Facebook. “It’s exciting to see so many deployments with Hughes and to work together to bring this viable solution to more local retailers and Internet users across Latin America.”

Hughes Express Wi-Fi is one of several Community Wi-Fi Hotspot solutions offered by Hughes. Including the latest installations in Latin America, Hughes customers have deployed more than 33,000 satellite-enabled Community Wi-Fi hotspots in countries like Brazil, Indonesia, Mexico and Russia, bringing the benefits of Internet access to more than 26 million people around the world. With a Community Wi-Fi hotspot, any user can access the Internet with a Wi-Fi capable handheld or laptop, either on a prepaid or government-subsidized (USO) basis, depending on the service model. The solution can readily be deployed virtually anywhere within the satellite footprint, including areas unserved or underserved by wireline or wireless infrastructure.

Watch this video for more on the benefits Hughes Express Wi-Fi brings to the Santa Barbara village in Brazil. For more information, click here.