Washington, DC, September 9, 2021 – Hughes Network Systems, LLC (HUGHES), an innovator in satellite and multi-transport technologies and networks for 50 years, and OneWeb, the low Earth orbit satellite communications company, today announced that they have signed a distribution agreement in the U.S. focused on enterprise services. In India, the parties have entered into an MOU for a strategic agreement to distribute services to large enterprises, small and medium businesses, government, telcos and ISPs, including in the rural and remote parts of the country. Services will be offered by Hughes Network Systems, LLC, and Hughes Communications India Private Ltd., respectively. Hughes and OneWeb intend to work together to broaden distribution globally, with Hughes to offer OneWeb’s low-latency, high-speed connectivity for markets such as enterprise, government, commercial aviation and maritime, cellular backhaul, and community Wi-Fi hotspots. 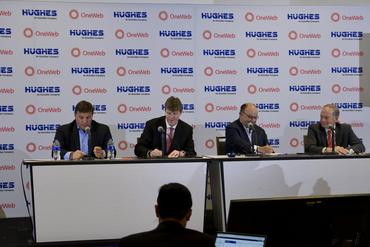 Pradman Kaul, President, Hughes, said: “The future of connectivity depends on a worldwide network of multiple transports, including terrestrial, geostationary and Low Earth Orbit satellite services. OneWeb’s system enhances the Hughes portfolio of networking capabilities, introducing a low-latency option with global reach that complements GEO satellite capacity density and capability to meet our customers’ needs. As a case in point, in India which has been starved of high-throughput satellite services, the OneWeb services will help us meet the tremendous backhaul and broadband demand.”

Neil Masterson, Chief Executive Officer, OneWeb, said: “OneWeb is thrilled to be working with Hughes to offer our connectivity solution across the U.S and India. This agreement is another example of our commitment to deliver high-quality, continuous internet access to areas in need including in rural and remote areas of the U.S and India. Hughes is already an important investor and an invaluable technology partner, and I look forward to continuing to grow our relationship further.” 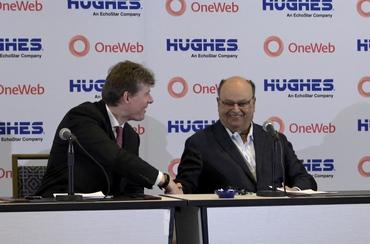 At a jointly hosted session at Satellite 2021 at National Harbor, Maryland, representatives of the companies signed the new agreements, addressed their ongoing partnership, and shared a demonstration of multi-orbit connectivity in action. The test, recorded on August 26, featured the successful real-time, seamless switching between the Hughes JUPITER 2 geostationary, high-throughput satellite (HTS) and OneWeb’s low latency, high speed LEO constellation. The demonstration highlighted advantages of each type of connectivity as Hughes ActiveTechnologies™ software instantaneously evaluated the type of traffic and transmitted it over the most efficient path: latency-sensitive activities (like fast-twitch video gaming and a video call) were transmitted via OneWeb; bandwidth-intensive activities like video streaming were transmitted via JUPITER HTS.

Today’s agreement expands an established relationship between the two companies. Hughes, through its parent company EchoStar, is an investor in OneWeb. It is also an ecosystem partner to OneWeb, developing gateway electronics and the core module that will power every user terminal for the system. And Hughes is the prime contractor on an agreement with the U.S. Air Force Research Lab to integrate and demonstrate managed LEO SATCOM using OneWeb capacity in the Arctic region.

OneWeb works with carefully selected distribution partners in each of its core markets, providing new business and expansion opportunities through the low latency, global, high throughput attributes of OneWeb’s network.

OneWeb is building its initial constellation of 648 LEO satellites. Services will begin this year to the Arctic region including Alaska, Canada, and the UK. By late 2022 OneWeb will be offering its high-speed, low latency connectivity services globally. Service testing on the satellites already in orbit is underway, using gateways that Hughes is building for the network. Results are positive, including seamless satellite and beam handovers, high speeds and low latency.

To help meet demand for broadband, Hughes is developing its next generation JUPITER 3 Ultra-High Density Satellite, expected to launch in the second half of 2022.

About EchoStar
EchoStar Corporation (NASDAQ: SATS) is a premier global provider of satellite communication solutions. Headquartered in Englewood, Colo., and conducting business around the globe, EchoStar is a pioneer in secure communications technologies through its Hughes Network Systems and EchoStar Satellite Services business segments. For more information, visit www.echostar.com. Follow @EchoStar on Twitter.

OneWeb will enable connectivity for governments, businesses, and communities. It is implementing a constellation of Low Earth Orbit satellites with a network of global gateway stations and a range of user terminals to provide an affordable, fast, high-bandwidth and low-latency communications service, connected to the IoT future and a pathway to 5G for everyone, everywhere. Find out more at http://www.oneweb.world.