The Role of Satellite in the Connected Future 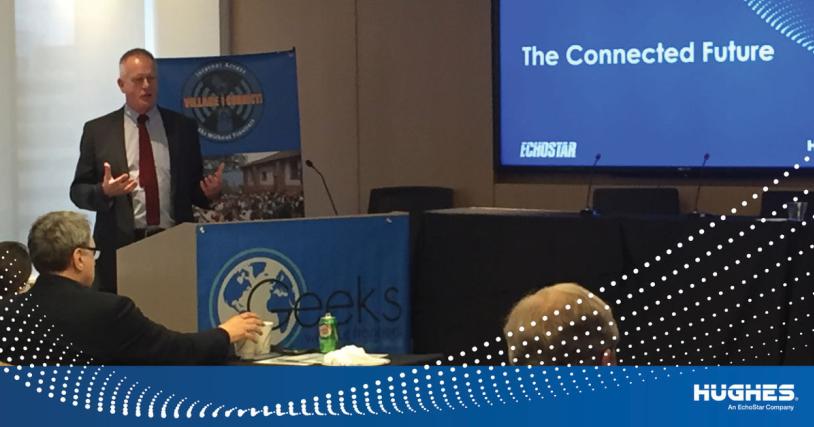 This week, I had the pleasure of speaking at “Connectivity is the Revolution!” the third annual thought leadership forum put on by Geeks without Frontiers. Held in Washington, D.C., the forum featured an interesting – and I would say, impressive – array of connectivity providers – from established satellite companies like Hughes and Intelsat that connect millions around the world to start-ups like Red52 and Althea Mesh that offer alternative means of connecting unserved communities.

As an industry, we should be proud of what we’ve achieved. Today, there are over 4 million deployed VSATs around the world that provide satellite connectivity. In North America alone, close to 2 million subscribers use satellite Internet as their primary connectivity – either for residential or small business purposes. According to the SIA, over the next few years, staggeringly, more than 48 new GEO satellites are to be launched, accounting for more than 5.3 Gbps of additional capacity. Add 24,540 Gbps of NGSO capacity to be deployed, and you have a dynamic industry that continues to evolve and deliver high quality services to its markets.

And make no mistake: the markets that rely on satellite are diverse – from the individual subscriber at home to government and military applications to small businesses and large enterprises. In fact, across the U.S., convenience stores, pharmacies, restaurants, gas stations and every imaginable kind of small and large business use satellite technology – and the average customer has no idea that satellite carries their credit card transactions, medical record transmissions, loyalty programs and so much more. Around the world, satellite enables cellular backhaul, Wi-Fi hot spots, and in-flight Wi-Fi. We’ve taken HughesNet to Brazil, Colombia, Peru and soon other countries to provide satellite Internet service.

And satellite continues to evolve and push the limits of technology. Earlier this year, we demonstrated service running at 200 Mbps download on our HughesNet production infrastructure. We’ve implemented unlimited data plans for our subscribers. The new generation of LEO satellites will complement existing and coming GEO deployments. We continue to innovate, optimize and enhance satellite technology.

Yet billions of people around the world remain unconnected. It’s not just developing countries that straddle the digital divide. We believe that there 18 million households in the U.S. that are unserved or underserved by terrestrial technologies.

One might think that’s good news for the satellite industry from an opportunity standpoint. However, we have a problem.

Despite all the proof points demonstrating the value of satellite in connecting the unconnected, misconceptions persist, only serving to further isolate the unserved and underserved. Satellite technology must be embraced for what it does: which is deliver a very good service efficiently in areas where laying fiber is cost prohibitive.

I call upon the entire connectivity industry – from 5G to fiber, from white space to small sats – to join us and win the hearts and minds of consumers, enterprises, regulators and influencers in understanding that satellite plays an essential role in the communications infrastructure. We need to take every opportunity to shout from the rooftops that satellite is a viable solution to deliver 100% broadband coverage, everywhere. Connectivity may be the revolution, but only satellite can deliver it anywhere and everywhere it’s needed.

Connecting the Unconnected Part 6: The Future of Connectivity