SATELLITE 2019 Round-Up: Powering a Connected Future around the World 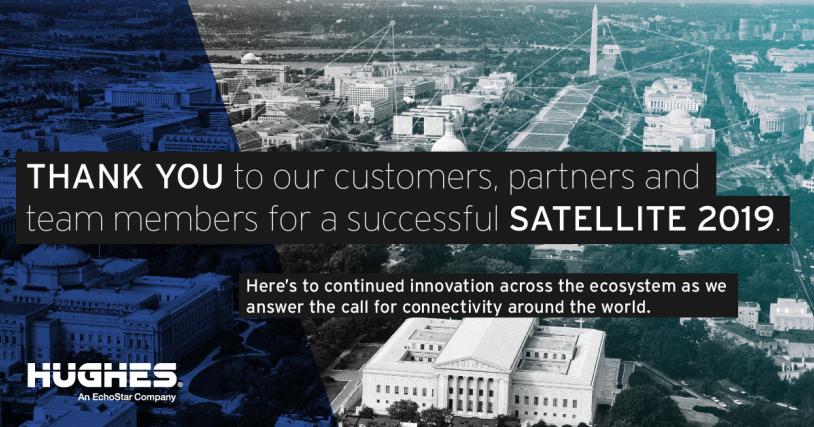 This last week, Hughes participated in SATELLITE 2019, an annual gathering of the critical players in the exciting and dynamic satellite industry. Our executives helped the lead the conversation on important industry topics like integration of satellite in the 5G future, the evolution of HTS and GEO satellites, updating government satellite service models, community Wi-Fi hotspot solutions, satellite backhaul and more.

Hughes also took the opportunity to share important milestones and new developments in our ongoing efforts to connect people and enterprises around the world.

We kicked of the show with breaking news of our latest joint venture with Yahsat to provide Ka-band satellite broadband services in Brazil to meet the rapidly growing demand – it is estimated that there are 12 million households in Brazil that are unserved or underserved. Our joint venture combines more than 65 Gbps of Ka-band satellite capacity on Hughes 65 West, Hughes 63 West and Al-Yah 3 high-throughput satellites to reach more than 95% of Brazil’s population with broadband connectivity. The result will power consumer Internet access, enterprise networks, cellular backhaul and community Wi-Fi hotspot solutions, creating lasting benefits for communities and businesses alike.

In another testament to our growing service footprint in South America, Hughes announced the expansion of our flagship consumer Internet service, HughesNet®, in Chile. This launch is especially meaningful for us, as it is estimated that nearly half of Chilean households either have no broadband Internet access, or have service slower than five Mbps. With our solution, more than 98% of homes throughout the country will have access to high-speed Internet, allowing Chile to experience the social, economic and educational benefits of the connected experience.

We’re also connecting more people north of the border, as Canada’s leading rural broadband service provider, Xplornet, entered into a lifetime capacity agreement with Hughes on JUPITER™ 3 Ultra High Density Satellite (UHDS.) The agreement provides Xplornet with capacity to reach more than 90% of the population of Canada at download speeds up to 100 Mbps.

To help connect even more people – especially those for whom a subscription-based Internet service is unaffordable – Hughes offers satellite-enabled Community Wi-Fi hotspot solutions. Our customer PT Pasifik Satelit Nusantara (PSN), the oldest private telecommunication and information service provider in Indonesia, recently installed their 2,000th Community Wi-Fi hotspot using Hughes JUPITER™ technology. PSN now enables Internet access for over one million Indonesians through Community Wi-Fi. In Russia, we’ve partnered with KB Iskra and Altegro Sky to deploy 1,300 satellite-enabled Community Wi-Fi hotspots, providing Internet connectivity to more than 300,000 people across hundreds of villages. Most recently, Hughes announced that we are working with Facebook to offer Community Wi-Fi hotspots in Mexico and Brazil. Through this program, local merchants make Internet access available to their customers at an affordable, per-use price, using Hughes satellite connectivity to deliver the service and the Facebook Express Wi-Fi platform to manage their Wi-Fi business.

Meanwhile, the Hughes JUPITER System continues to be the platform of choice worldwide for high performing and efficient satellite broadband. We announced enhancements to the JUPITER System, including: support for up to 300 Mbps of throughput; 16,000 TCP sessions; a newly designed, cost-effective Ka-band radio employing higher order modulation for the return channel; reduced in-route channel spacing; and Layer 2 protocol support. Taking advantage of our advanced technology, Eutelsat selected the  JUPITER System to enable services on its KONNECT new-generation High-Throughput Satellite (HTS) for Western Europe and Africa.

And finally, we announced that in India, Hughes and telecom major, Bharti Airtel will combine our VSAT satellite communications operations to serve enterprise and government customers.

We are eager to continue our work to power the connected future everywhere and look forward to sharing new developments as we advance our mission.

Satellite Delivers Essential Connectivity to Students and Teachers Around the World