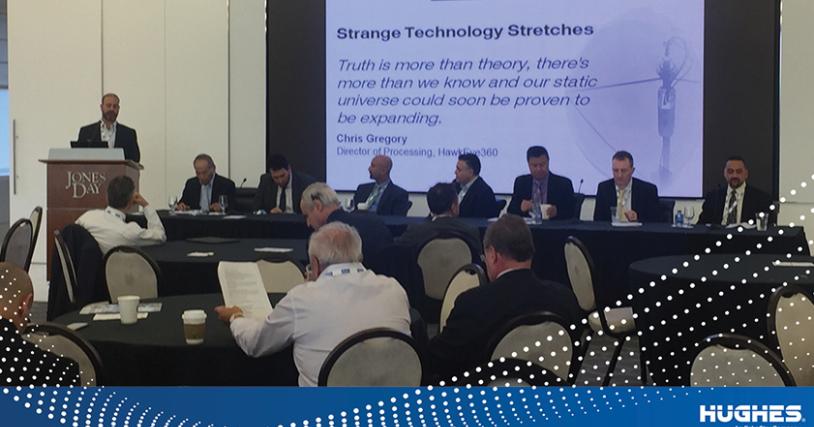 In 2019, Hughes received a request to demonstrate its Artificial Intelligence (AI)-based network automation capabilities for satellite communications (SATCOM) between a ground station and the International Space Station (ISS). A switchover of the ground-space link with the ISS was performed as it orbited over the NASA Glenn Research Center in Glenn, OH, where the demonstration was conducted. Hughes engineers had to work quickly to configure the solution, which autonomously switched a communications signal between different modems aboard the ISS using the Hughes Flexible Modem Interface (FMI), a Software-Defined Network (SDN) technology designed to give military satellite systems higher availability and resiliency.

“The success of the ISS demonstration is the direct result of intensive collaboration between several different teams at Hughes and our customer,” said Rick Lober, vice president and general manager of Hughes Defense Division. “Our engineers in Germantown and San Diego came together in support of our customer and exceeded expectations in all areas.”

In the demonstration at the Glenn Center, the FMI software controlled two modems onboard the ISS, orbiting 254 miles above the Earth, using automated commands to switch the transmission successfully based on conditional rulesets. The test at the NASA facility was led by Michael Rodgers, a principal software engineer based with the Hughes MobileSat Division in San Diego, which supports several defense programs.

“The ISS test shows the important role that AI-based network technology will play in delivering higher resiliency and flexibility to satellite communications systems whether on the ground, in the air or on a space station,” said Dr. Rajeev Gopal, vice president of Advanced Defense Programs at Hughes. “Government and commercial enterprises need application assurance to meet the increasing demands on their communications networks, and this test proves, once again, that Hughes can deliver that assurance cost-effectively.”

A significant advantage of the innovative Hughes FMI Solution is that it can be used with existing terminals, making it possible to add secondary and tertiary service options for connectivity without needing to replace large volumes of expensive hardware. Hughes previously demonstrated its FMI technology in December 2018 as part of the USAF Space and Missile Command’s SATCOM Pilot Programs to enable interoperability for military satellite communication networks. Standards-based interoperability for SATCOM systems and services is critical to meeting DoD’s Enterprise Management and Control (EM&C) concept for future networks and holds important potential for commercial networks, as well.

“Hughes continues to enhance the capability to ensure that the new space enterprise architecture will support terminals with multiple modems for switching across services, including from geostationary and non-geostationary orbit satellites,” added Dr. Gopal.”