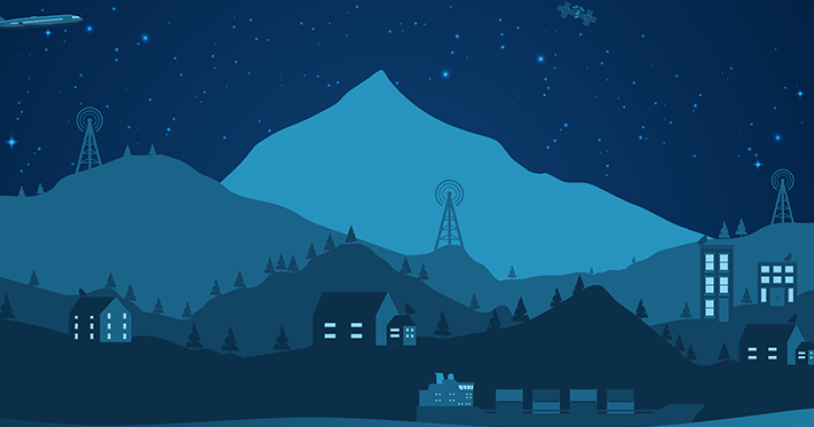 At Hughes, we’re celebrating a half century of innovation brought about by the brightest engineering minds and a penchant for problem solving. To commemorate our 50 years, we surveyed our employees worldwide for their insights on a wide range of topics, including which employees – past or present – have had the most influence on the industry. Here, we highlight the five most influential, as identified by their colleagues.

Pradman Kaul, president and CEO of Hughes – Far and away, the person to receive the most employee votes is Mr. Kaul. Through his 40-year career, he has demonstrated excellence in technology development, production management and executive leadership. In 1973, Mr. Kaul joined the technical staff of DCC, the company that later became Hughes Network Systems. In those early years, he and his colleagues developed many groundbreaking technologies, including time-division-multiple-access (TDMA) for satellite communications. Mr. Kaul developed the first commercial application of TDMA in a system for Telesat in Canada, connecting the Atlantic undersea cable from Halifax to Allen Park. He was also a leading developer of the Very Small Aperture Terminal (VSAT) and the Spaceway satellite system. He has helmed Hughes since 2000 and been recognized widely across the industry for his contributions, including being inducted into the SSPI Space & Satellite Hall of Fame and the National Academy of Engineering, and he received that Arthur C. Clarke Foundation Innovator Award in  2012.

Paul Gaske, EVP and general manager, North America – An early visionary for DCC, Mr. Gaske focused on the future of data networking, designing satellite TDMA systems for Intelsat signatories. He then joined the team creating the first interactive data VSATs and helped launched the satellite data networking business, with such customers as Chrysler, Chevron and General Motors. By 1987, Mr. Gaske was spearheading the development of products and services for Hughes, helping grow the company into the world’s leading supplier of VSAT technology. He led the division of the business that launched HughesNet®, which has become the #1 choice for satellite Internet service across North and South America. Mr. Gaske is also a member of the Space & Satellite Hall of Fame, inducted in 2020.

Doug Dillon, VP of Technology – In 1994, Hughes was developing a service to provide Internet to consumers and businesses via satellite but needed a communications protocol for transmitting TCP/IP data. Mr. Dillon, along with colleagues, created an asymmetric protocol that allowed TCP/IP data transfer over high latency channels and, with it, turned conventional wisdom on its head by splitting two-way Internet traffic into a high-speed data channel broadcast to many users over a satellite and a return channel from each user over the existing telephone network using a dial up modem. This innovative approach proved beneficial for the initial consumer service, enabling fast download speeds in a world of slow internet. Mr. Dillon is credited as the “father” of Hughes DirecPC satellite internet, launched in 1996 for consumers and small businesses. That early service was the foundation for what became HughesNet in 2012. Mr. Dillon is a prodigious producer of intellectual property having contributed to over 70 patents.

Adrian Morris, EVP of Engineering and CTO – Under Mr. Morris’ engineering leadership, Hughes has defined the VSAT market and maintained a leading market share in both the domestic and global satellite markets. Today, Hughes has shipped more than 9 million terminals of all types to customers in over 100 countries around the world. He led the development efforts for Hughes Spaceway and the JUPITER program from their inception – starting with the JUPITER 1 satellite and associated ground system to the JUPITER 3 satellite currently under construction. The JUPITER System is now the de facto standard for satellite implementations worldwide, in use on more than 40 satellites.

John Corrigan, Sr VP of Engineering – In addition to developing concepts for local distribution of voice and data traffic using TDMA, Mr. Corrigan led the engineering teams that developed wideband multiple access for satellite networks and developed the first practical VSAT satellite network. He has also been instrumental in the design and implementation of very large scale integration (VLSI) devices for the full range of Hughes broadband and mobile satellite products; and is responsible for the development of fourth-generation mobile satellite infrastructure and chipsets. Most recently, Mr. Corrigan leads the Hughes engineering effort to develop the gateway electronics and core module for the OneWeb Low Earth Orbit system.

In addition to inspiring their colleagues at Hughes, these five thought leaders have played a central role in evolving satellite communications to be a vital part of the data communications that underpin the global economy of the 21st Century. The Hughes employees who applaud them as influencers have had a front row seat to these achievements. But innovating the technologies and services that make constant connectivity possible for people, enterprises and things requires all employees to make significant contributions. Ultimately, it’s that collective effort by everyone at Hughes that has shaped not only the business, but the industry.

Innovations that Changed the Industry: The Two-Way VSAT