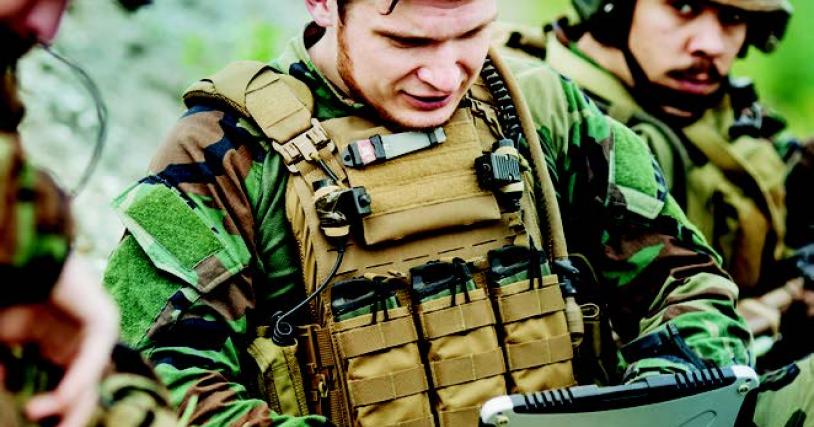 Interoperability of communications systems is a major objective in the defense market. This was clearly evidenced by leaders in the U.S. Department of Defense that recently witnessed a Hughes demonstration of a novel Software-Defined Network (SDN) embedded with an advanced Artificial Intelligence (AI) agent.

The demo successfully proved the concept of a new level of Enterprise Management and Control (EM&C) that gives all user satellite terminals the ability to switch automatically among multiple modems and services when one is disrupted. Driven by software that manages a first-of-its-kind autonomous selection and orchestration of modem, satellite and service, the demo also featured a proposed Government Network Operations Center (GNOC)—with policy rules defined on an ongoing basis and sent to the terminals for path selection.

And the implications are significant—not just for the defense sector, but for the commercial market overall. Through improved interoperability comes improved security and resiliency, opening the way for highly secure and robust communications solutions that withstand intentional or environmental interference.

“This next-generation network demonstration reinforces the strong partnership between the military and the commercial satellite sector,” said Dr. Rajeev Gopal, vice president advanced systems at Hughes. “Our engineering teams from Maryland to San Diego are working to customize and build a stronger SATCOM infrastructure using state-of-the-art software and AI techniques. Our advanced technologies will deliver the full benefits of commercial high-throughput satellites with future low-earth and medium-earth orbiting networks.”

A critical component to this demonstration was the ability to use “out-ofthe-box” terminal modems. Demonstrating that this network management capability can be achieved without requiring DoD to buy all new terminals is important. While terminals will need software updates to integrate with EM&C and require time and some investment, overall this SDN capability equates to a highly cost-effective solution for DoD given the number of terminals they have in operation around the world, which was recently estimated to be over 17,000.

This capability can add unprecedented flexibility when compared to the legacy approach of buying transponded bandwidth months in advance, which may or may not be enough or, might not be used at all. EM&C essentially turns a previously two-month “best-guess” process into a concise five-minute automated exercise with predetermined rates for a “bandwidth-on-demand” model that would give DoD a more affordable and sustainable cost structure for their satellite networks.

In the demo attended by various leaders from DoD, Hughes used the management software to switch automatically between JUPITER™ and Comtech modems with a simple multi-modem adaptor to create the interoperability between multiple service options. By creating path diversity and redundancy with automated provisioning at network endpoints, the new EM&C will greatly improve overall network operational efficiency.

“Hughes has a long history of innovation in commercial satellite technology and services and we’re leveraging the talent, and expertise of our engineers across the company to transform military communications,” said Rick Lober, vice president and general manager of Defense and Intelligence Systems Division (DISD) at Hughes. “The network solution our Hughes team presented gives a glimpse into DoD’s future—a flexible and resilient SATCOM architecture that will enable greater mission assurance for service men and women.”