“It was overwhelming, the devastation,” Ivelisse recalled. “There was no power, no communications. But I just felt blessed that I was able to get through it without getting hurt or losing my home or roof like so many others did. As soon as I went outside, I saw how bad it really was.” As the days turned to weeks, and progress was so slow, the people of Puerto Rico continued to face a number of daunting challenges.

“We had to deal with contaminated water. Stores [that were open] were limiting each family to one pack container of water,” she said. Lack of access to clean water was one of the biggest setbacks on the island with a devastated power grid.

Ivelisse expanded, “We had no running water for weeks because there was no power for the pumps in the system. Once we got water, we found out it was contaminated.” The generators that were powering the water system couldn’t keep enough fuel on hand to keep it running and even when it was on, the water almost assuredly had to be boiled before consuming.

On top of lacking daily access to clean water, it was and still is very dark at night without power. “Even with generators, I’ve never seen San Juan this dark. I’m glad the police have sent out extra patrols at night,” Ivelisse added. 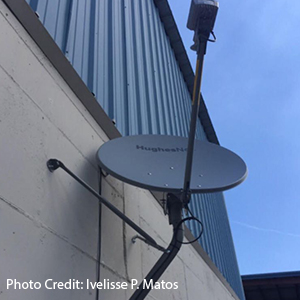 “We were so blessed because our office is near the highway so we were able to get the business open not long after the storm. I was able to communicate at first using the HughesNet dish at my house to contact our U.S.-based partners and start planning.” Ivelisse was eager to get back to work to support the wider recovery effort.

“We had 20 HughesNet terminals in stock before the storm hit so after it left, we had to prioritize which of the critical recovery sites needed them most and then understand the order they could get installed based on who had generators and if we had safe access to their location,” she said, knowing things were bad in the rural mountain areas and that getting there would be extremely difficult. “There was a lot of debris and power lines in the roads especially outside of the cities that made getting around very difficult.” Among the first to get the 20 terminals she had in stock were the airport, local government offices, several pharmacies and supermarkets and the Hospital Metropolitano de la Montaña in Utuado. Ivelisse noted that the satellite service assisted in getting the local economy back up and running and while progress has been slow, it was a start. 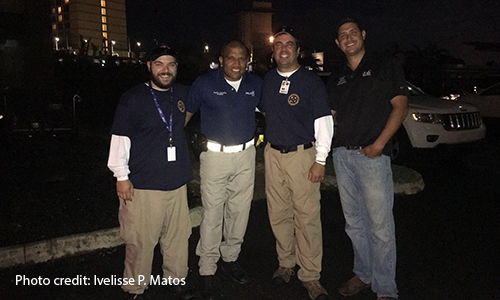 “It was not just a logistical help but satellite has had a positive economic impact. It has enabled businesses to stay open and keep employees’ jobs secure,” she said. “Citizens could go to stores with connectivity and not worry about needing cash to buy food, water, clothes and everything else they need.” She gave an example regarding incoming shipments to the island. With stranded boats littering the marinas and toppled cranes along the ports, if boats and ships were able to make it into the port, she explained, “Satellite enabled the tax transactions to be processed so incoming shipment containers could be legally released onto the island.”

Ivelisse closed the conversation with one last thought, “Although we have many internet service providers on the island, the HughesNet satellite internet service during this crisis has been much more than just another service provider. It has been essential in helping the recovery of Puerto Rico.” Ivelisse’s faith and optimism for the road ahead are inspiring. So many people would throw in the towel and give up when faced with this massive adversity. But she and the rest of Puerto Rico are determined to dig their heels in and build the island back up to be even better than it was before Hurricane Maria.